Why we have a set of family rules 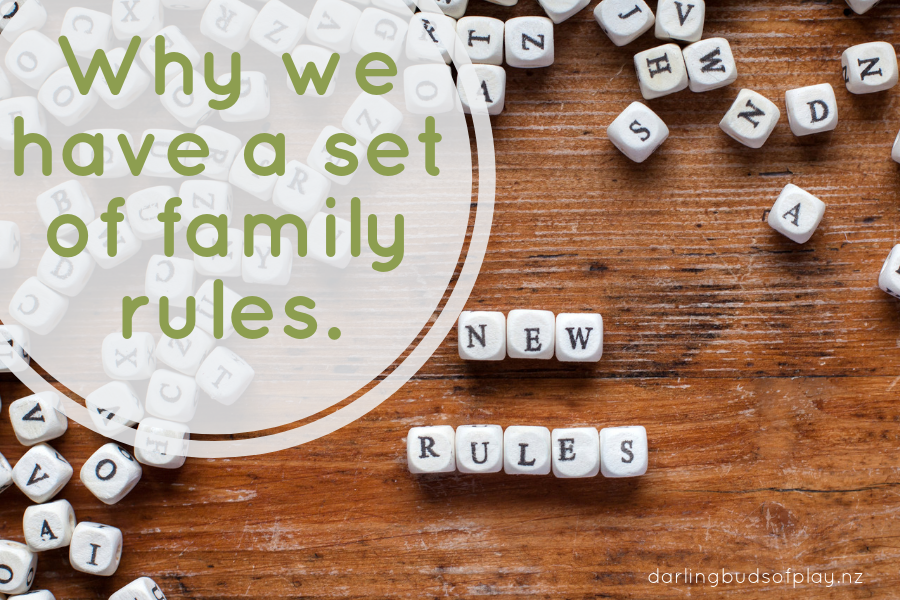 For a long time I struggled with my children throwing their toys (often at each other), yelling, name calling and a whole host of other behaviours that I really didn’t want them to be doing. Why couldn’t they behave like reasonable, normal people? The answer is so freaking obvious that I can’t believe someone had to tell me it.

We need to show and tell them how to behave. They’re not born with an innate understanding of what it is to be a reasonable, normal, functioning human.

To this end, we instituted the Anthony Whānau Rules. A basic list of behaviours that we expect everyone in our family to abide by… a How-To on being a decent person. Here’s how we come up with and enforce our family rules. 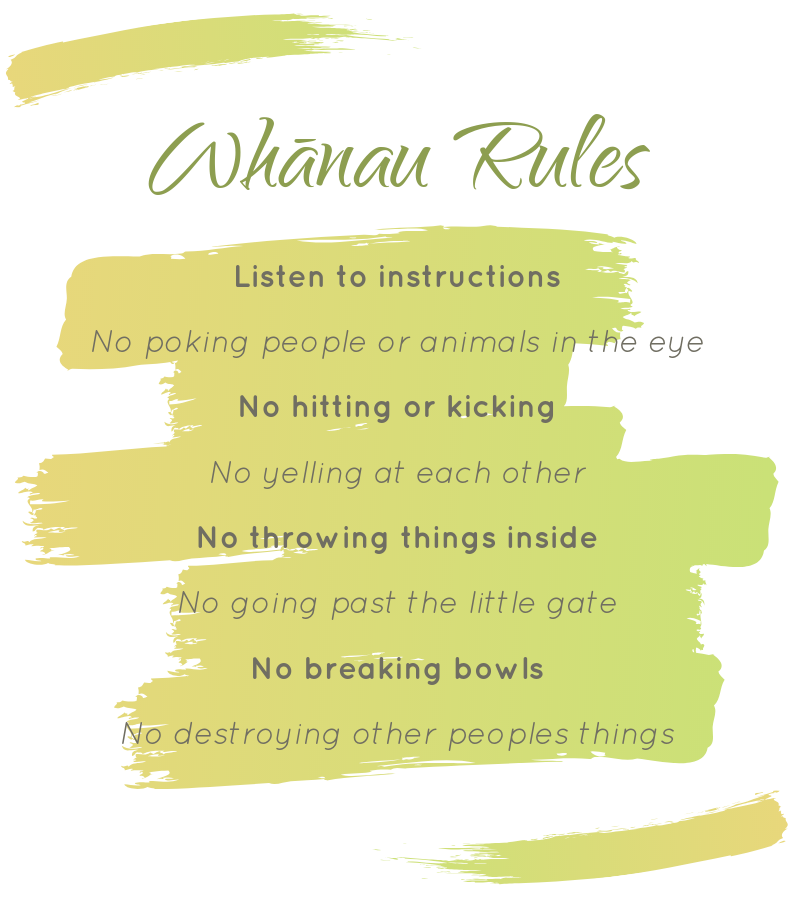 We’re on version 2 of the whānau rules. Both times we’ve written them, we’ve done it as a family. This leads to some interesting and oddly specific rules (see: no poking people or animals in the eye) but it gives the kids a sense of ownership over the rules and they are then more likely to follow them.

2. The rules are easily visible.

We hang up copies of the rules in the lounge and the boys’ bedroom. Although the kids can’t read, they soon learn which of the rules says what. It’s a constant reminder (kind of like a poster of Big Brother) that we have a set of rules and a set of expectations for behaviour. Connor, in particular, will often walk up and point to a rule when someone breaks it. Which brings us to the next important thing…

3. Everyone follows the rules and everyone enforces the rules.

Notice the fourth rule? No yelling at each other. That means Ian and I as well. We’re not allowed to yell at the kids. Even if they’re pushing the very limits of my patience because I’ve asked them to put on their shoes approximately 15 times in the last 3 minutes (see: listen to instructions), yelling is not an acceptable behaviour in our house. When I do yell, I can be sure I’m about to get told off for it… usually by Connor. 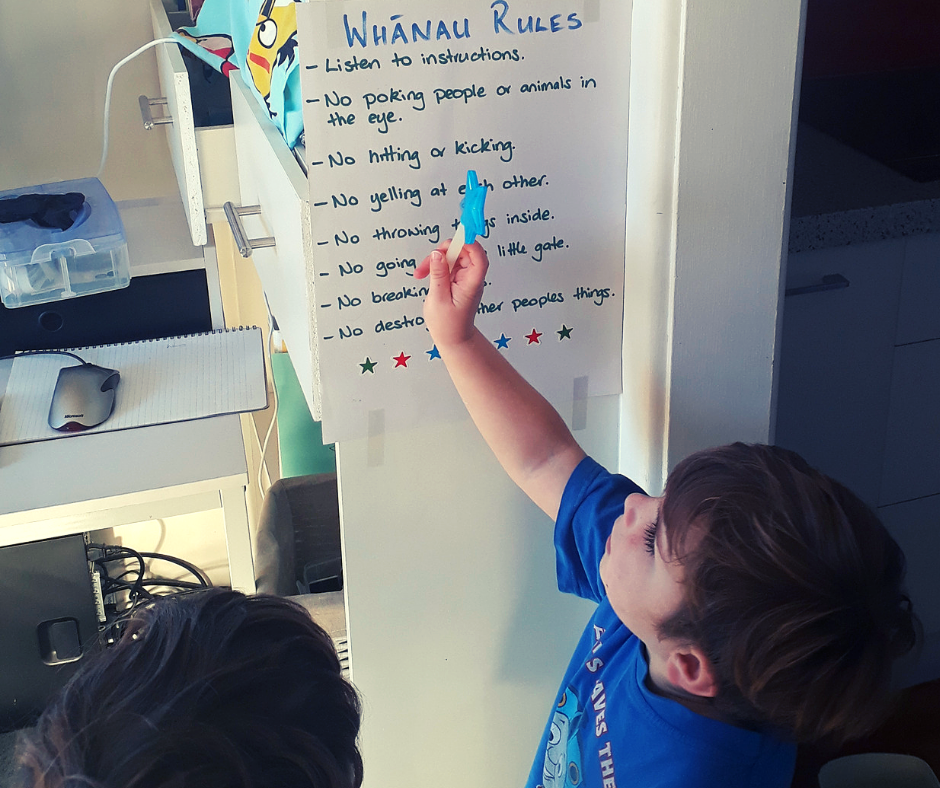 4. Frame your rules your way.

Much of the parenting advice I see tells us to frame rules in a positive manner. We tried “we speak to each other with kindness and respect” but it wasn’t working for my kids. While this is still the core tenet behind this rule, we’ve found that “no yelling at each other” works much better for our family. 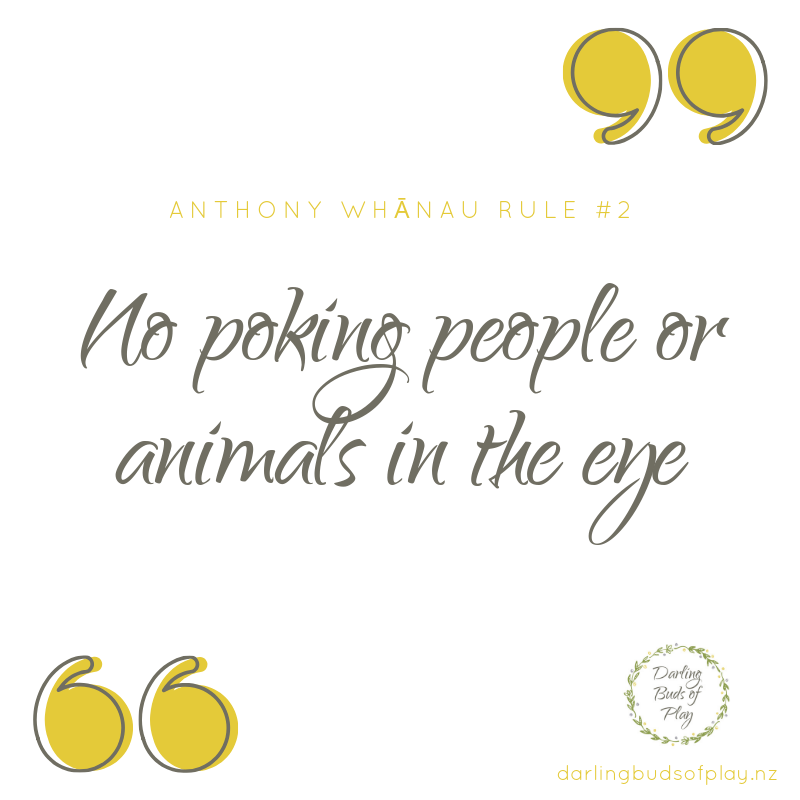 When someone follows the rules, we praise them. “Thank you for listening” or “great listening!” are two very commonly used phrases in my house. When a dispute between the boys is resolved without hitting, kicking or yelling, they get so so much praise! Rules don’t exist so we can correct bad behaviour, but so we can appreciate how awesome it is when we all behave with love, care and respect.

The rules about yelling, throwing and violence are a carry over from the first set of rules. One of the rules on the first list was “no talking with food in your mouth”. Although it hasn’t been on the written list for a few months, it’s still a rule that’s followed and enforced. Once a rule becomes a key part of your family’s behaviour it can come off the list and become “business as usual”. As Connor began spending more time on his bike, we needed a rule for how far down the drive he’s allowed to bike, hence “no going past the little gate”. As your family grows and evolves, so should your family rules.

What rules would you codify for your whānau?